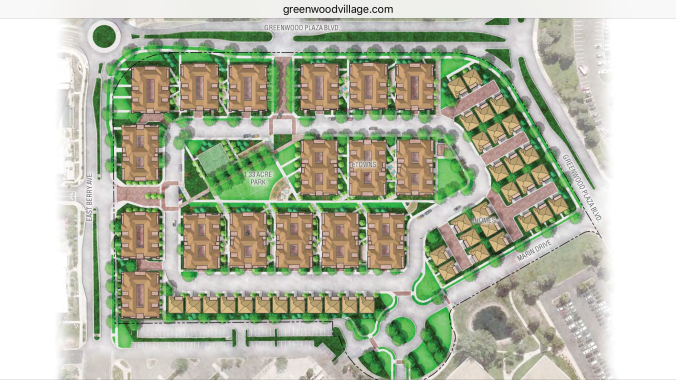 In a purely political move, Leslie Schluter made a motion to continue Century’s application to November 6. Not coincidentally, November 6 is the night before the Greenwood Village City Council elections, at which point the large majority, if not most, of GV voters will have returned their mail-in ballots.

Unfortunately for Ms. Schluter and other supporters of high-density Transit Oriented Development (TOD), the motion failed by a vote of 5-4.

The Mayor broke the tie and voted no. Leslie Schluter, Freda Miklin, Darryl Jones and Tom Bishop all voted in favor of delaying the Landmark Village Vote until the eve of the city council election. These four city council members all voted IN FAVOR of the Orchard Station Subarea.

TJ Gordon (District 4), Freda Miklin (District 1) and Darryl Jones (District 2) are all running for reelection in contested elections and all SUPPORTED the Orchard Station Subarea.

Seanna Mulligan also supported the Orchard Station Subarea and is running for Leslie Schluter’s seat in District 2. Seanna has spoken in support of high-density development and was a member of Alberta Development’s Yes for Greenwood Village issue committee that flooded GV homes with Orchard Station propaganda during the June special election.

Judy Hilton (District 4), Dave Kerber (District 2), Anne Ingebretsen (District 2), Jerry Presley (District 1) and Dave Bullock (District 1) have all been endorsed by Save Our Village and were vocally OPPOSED to the high-density TOD development envisioned in the Orchard Station Subarea.

Jeff Kahn is also running for City Council in District 4 and spoke against the high-density Century Communities’ development.

Tom Dougherty is the final candidate in District 4, but to my knowledge, has not taken a public position on Orchard Station.

Steve Moran and George Lantz, who both voted against the Orchard Station Subarea, are also running for reelection in District 3, but are unopposed.

Ultimately, City Council continued the Century Communities hearing until Oct. 16. Darryl Jones asked to reopen the public hearing to give Century a chance to address the density and open space concerns.

We will see what happens on October 16 and if City Council finally agrees to listen to the people. 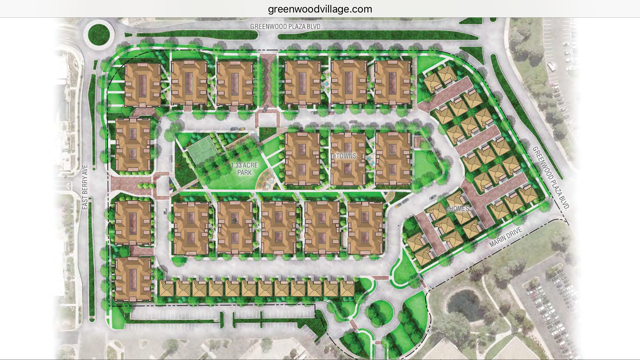 By a 6-1 vote Greenwood Village Planning & Zoning reached the right conclusion and failed to recommend Century Communities’ high density 189-unit Landmark Village residential development proposal to City Council. The affirmative motion was worded to “not recommend” the development application.  Jon Ekoniak was the sole P&Z commissioner who voted against the motion. Commissioner Steve Goldman was absent.

The proposed application sits on 13.1 acres in the formerly proposed Orchard Station Subarea. The hotly contested Subarea that would have encouraged transit oriented development (TOD) including high density residential, retail and office was overwhelming defeated 76% to 24% in the June 6 Special Election.

Century’s current 189-unit application is the result of comments received from City Council during review of its initial 104-unit application in 2015/2016. Those comments on February 22, 2016 suggested that the 104-unit proposal did not conform with the vision for the Orchard Station Subarea and high density TOD. Consequently, Century withdrew the initial application and came back with almost twice the density to address the comments received from City Council.

Since P&Z is only a recommending body, the Century application will still move to city council at a date to be determined.

Per an update to the August 15 P&Z agenda, Century Communities’ high-density residential Landmark Village development application has been moved to the September 5 meeting.

Century’s application is in direct conflict to the existing Comprehensive Plan that 76% of voters chose to maintain in the June 6 Special Election.

Read my letter to the City here.

On August 15, 2017 Greenwood Village Planning & Zoning will hold a public hearing to hear public comment and deliberate its recommendation to City Council on Century Communities’ Landmark Village development proposal in Orchard Station. Note: Century completely ignored public opinion by submitting this application one day after the June 6 GV Special Election.  The June 6 election by a 3-to-1 margin defeated the proposed Orchard Station Subarea that was required to make this development compatible with the City’s Comprehensive Plan.

Here is my letter to city officials expressing why this application should be rejected.

This letter serves as my STRONG OPPOSITION to the development application submitted by Century Communities on Wednesday, June 7, 2017 to develop 191 residential townhomes and single-family homes on 13-acres in the FORMERLY proposed Orchard Station Subarea. END_OF_DOCUMENT_TOKEN_TO_BE_REPLACED

Hilton’s and Presley’s announcements follow last week’s news that Anne Ingebretsen and Dave Kerber will run for City Council in District 2. All four candidates were integral and worked tirelessly to defeat the incredibly irresponsible and inappropriate Orchard Station Subarea amendment that fell in the June 6 Special Election by a 3 to 1 margin (76% against vs 24% in favor).

Five members of City Council (Miklin (D1), Schluter (D2), Jones (D2), Bishop (D4) and Gordon (D4)), along with six members of Planning & Zoning ignored unprecedented opposition leading up to the Special Election and voted in favor of the amendment. The Orchard Station Subarea would have allowed over 3 million sqft of new development, tripled building heights and caused massive increases in traffic around the Tech Center. The current majority of City Council and P&Z members are clearly out of touch with their constituents. Consequently, those representatives need to be replaced in November.

Judy has lived in Greenwood Village for over 40 years and was recently inducted into the Cherry Creek Schools Legacy Hall of Fame. Over her distinguished 30-year career in the Cherry Creek School District, she was the principal of both Eaglecrest High School and Laredo Middle School. Throughout her career she has provided incredible service to the community and epitomizes the Cherry Creek tag line “Dedicated to Excellence”.

Jerry Presley is one of the most likable people I have met in recent years. He has an enormous amount of wisdom and is incredibly reasoned in his arguments. Jerry previously served on city council for eight years and also served on P&Z.  This experience overlaps when the Comprehensive Plan was originally adopted in 2004 and the amendments that followed (2008, 2011, 2012 and 2015). It makes him intimately familiar with the diligent work that went into crafting the existing vision for the City and carefully balancing the residential and commercial interests. Ultimately, he understands why the proposed Orchard Station Subarea was such a contradiction to the existing character of the Village and the long-term and irreparable damage that would have resulted had the amendment been adopted.

Judy Hilton and Jerry Presley firmly grasp the vision and ideals that make Greenwood Village such a wonderful place to live and raise a family. They both are supportive of reasonable development that is compatible with the residential suburban character of Greenwood Village and also helps maintain the city’s tax base. They are both thoughtful, intelligent and passionate about Greenwood Village. I believe they will listen closely to their constituents and will carry forward the vision adopted in the existing Comprehensive Plan. For these reasons, combined with the overall quality of their character, I believe they will both make fantastic city council members. I look forward to enthusiastically supporting their campaigns.

Read their announcements in The Villager

The June 6 special election results in which 76% of Greenwood Village voters flatly rejected the Orchard Subarea Plan, demonstrate the misalignment between residents and the five city council members who voted in favor of the Subarea.

The Orchard Station Subarea amendment to the GV Comprehensive Plan would have welcomed dramatic increases in density, building height and over 1,000 new multi-family residential units.

Current District 2 council members Leslie Schluter and Darryl Jones, along with Freda Miklin, Tom Bishop and T.J. Gordon represent the five city council members who favored the amendment. Their approach was about abandoning the long-standing low density suburban character of the Village and replacing it with high-density Transit Oriented Development (TOD), which served as the premise for the now defeated Subarea.

Dave and Anne are both genuine, down to earth people who care deeply about preserving and protecting the special qualities of Greenwood Village.

They understand the decades of thoughtful planning and development that has resulted in great neighborhoods, unmatched city services and a significant and sustainable tax base provided by a thriving base of businesses.

They dedicated countless hours to the Save Our Village Issue Committee and defeating the Orchard Station Subarea amendment in the June 6 Special Election. They are both long-term residents of Greenwood Village and have both served on P&Z and City Council.  They have a deep understanding of the history of the Village and will be open to balancing the concerns and desires of citizens with reasonable development that fits with residents’ vision of Greenwood Village as articulated in the Comprehensive Plan.

I look forward to supporting both Anne and Dave in their campaigns.

There are many issues with amending the GV Comprehensive Plan and the massive 3.3 million square foot development that Alberta Development Partners proposed last summer. However, the biggest is density (no pun intended) because it will bring: 1) large increases in traffic (potentially 27,000 incremental car trips per day – twice a sold out Nuggets game) and 2) significant increases in building height (max of 5 stories today vs. 200 feet (the height of the Landmark) under the proposed Orchard Station Subarea.

I have heard people argue that the developer needs the increased density to generate an acceptable rate of return. The current zoning and Comp Plan governing Orchard Station already provide for significantly more development opportunity than Alberta has required in its other developments; suggesting there is more than enough opportunity to generate a reasonable return.

Alberta can currently develop just under 1.2 million of mixed-use square feet on its 24 acres in Orchard Station. That works out to current development capacity of 48,708 sqft per acre.

END_OF_DOCUMENT_TOKEN_TO_BE_REPLACED

“The Orchard Station area can be improved without involving the federal government. This is because capacity can be gained without I-25 bridge reconstruction.”

However, the Greenwood Village 2011 traffic study completely contradicts this statement about Orchard/I-25:

The traffic study also explains that Orchard/Quebec and Orchard/Yosemite will be challenging intersections to improve (see pages v, 25 & 32 for reference to “Challenging Intersections”).

Finally, keep in mind the 2011 study did not include any new development in Orchard Station.

Please look at the two pictures below of eastbound and westbound Orchard under I-25.  Does it look like there is an easy way to add capacity under this bridge?

It just doesn’t make sense that you can potentially add 27,000 vehicle trips per day and somehow reduce congestion 35-40%.

This week’s YourHub section of the Denver Post included the first in a Q&A series related to the Orchard Station Ballot Issue. The first question posed, “If approved, what impact do you anticipate the Orchard Station Subarea Plan will have on school enrollment in Greenwood Village?“.

It is stunning that Cherry Creek School District submitted the same response as it did in the January 2017 Greenwood Village Newsletter. Somehow CCSD reached the conclusion that the average annual impact of 1,200+ Orchard Station residences will ONLY produce 25 students. This conclusion makes no sense.

Using the national standards that CCSD provides in both articles, Orchard Station is projected to generate 300 students, or 12-times more than the District estimates. END_OF_DOCUMENT_TOKEN_TO_BE_REPLACED

Their mailings, website and full-page ads in the Villager claim that voting yes, “enables a 35-40% reversal of traffic congestion”.

Using traffic statistics from the Village’s traffic engineer, it is estimated that the 3.3 million square foot development plan (3-times the Size of Streets of Southglenn) that Alberta Development Partners submitted last summer could produce 34,000 VEHICLE TRIPS PER DAY (and that was only on 55% or 24 of the 44-acre development opportunity in the Subarea).  Most of these trips would be incremental, since the Marilyn Hickey Church and empty 13-acre lot in the proposed Subarea currently produce a limited amount of traffic.  This is over TWICE the amount of traffic from a sold out Nuggets or Avalanche game. END_OF_DOCUMENT_TOKEN_TO_BE_REPLACED